The  Powerstock Festival finally arrived on a sunny Saturday at the end of April.

Cider makers had all been contacted, Skimmity Hitchers were booked, tickets sold and we waited with high anticipation to see who would actually arrive.

Celebrations began as usual on the Friday evening at the Marquis of Lorne, a gathering of cider makers musicians and entertainers, some folk wearing both hats. Michel & Marie Anne entertained us with the usual Brassens song the naughty nurse, Jon subjected Paula to his funny snotter box tune and Nick and brother Tim led the Hereford Panker. Kev and Abert also did a turn although it was sometime before Albert actually got his wooden doll dancing! 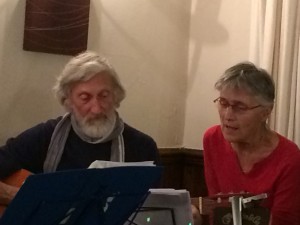 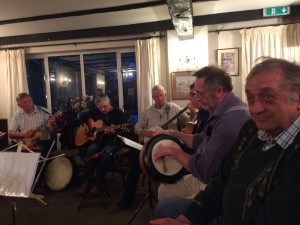 Saturday morning and entries for the competition were all catalogued and Ira’s lovely chicken lunch was enjoyed while cider makers shared gossip and cider.

The competition had entries from Dorset, Somerset, Gloucester, Wales, Kent, France and even America for the first time. Everyone subjected the entries to an exhaustive tasting and winners were chosen. We were thanked for our attention to detail, “even labeled the corks so we can get them back”.

The results are published on this site but the competition was very close this year, many runners up were very close behind the winners. We are very pleased to say we got 1st Prize in the bottle conditioned class with our Lancombe Rising, a lovely way to end.

Much to our surprise we were presented with a beautiful stoneware Wassail cup and matching goblets made by David Leach. It was very nice to be thanked by all of the cider makers we have come to know since starting this festival and now count as our friends. Also nice to hear they don’t hold it against Nick for hassling them for the last 16 years! 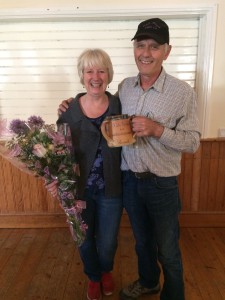 Moving into the evening and many people were generous with their thanks and appreciation for the last 16 years and said it will be sadly missed. It was a truly great evening, with Skimmity Hitchers playing their fabulous best and Nick was pleased to join them on stage for one last rendition of Drink up thee Cider. 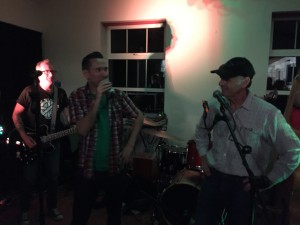 Powerstock Cider Festival has helped put Dorset cider back on the map and reintroduced cider to a new generation who have enjoyed the opportunity to meet the cider makers and taste their products. Over the past 16 years in the unique setting of Powerstock with music, food and a great atmosphere, combined with the generosity of the cider makers we are delighted that we have been able to raise over £43,000.00 for charity

Its time has come – new directions perhaps, but first a well-earned rest!

Of course we shall still be making and selling cider, competing and chatting to our cider making friends…..